Yes, there are women with Asperger’s syndrome too. I am one of them, and Joanna, the co-admin of this site, is another. I was diagnosed at 40, Joanna at 36, but many women are diagnosed later than that.

Asperger’s symptoms in adult females
The psychologist who diagnosed me explained that women are naturally more skilled at social interaction than men, and so tend to be better at overcoming and/or hiding autism-related issues, and our symptoms are often much less evident – at least on the outside. We are also often more interested in learning how to ‘get on’, and some of us spend enormous amounts of time, money and effort trying to match our clothes, our interests, and/or our style of interaction, to those around us in an attempt to fit in. For some it becomes an obsession. When we are still not accepted – as many of us aren’t – the blow is all the more crushing, and can contribute to existing, or subsequent, mental-health problems. I spent until I was 40 trying to fit in, and it takes a huge amount of confidence to face that many years of failure. I didn’t have it.

Diagnosis for women
Because of this greater skill in social-adaptation, autistic women also have a much harder time when it comes to getting a diagnosis. I had known my doctor for ten years when I went to see him about the possibility of my having autism. Until then, he had seen only the image I presented to people like him, particularly as I had children and would have never wanted to reveal any unidentified ‘weakness’ in case he thought I couldn’t take care of my kids. So he only knew the fake me, the look-at-how-normal-I-can-be me, and during the I-think-I-have-Asperger’s-syndrome consultation, he told me I couldn’t be autistic, because I was female and an adult (and referred me for depression). This level of ignorance amongst frontline medics (or any medic) is of course unacceptable, but it exists, and you need to be prepared for the possibility of encountering something similar when visiting your own doctor. See the “Think You Have Asperger’s Syndrome?” and “It’s Okay to Want a Diagnosis!” pages for more advice on going for a diagnosis.

Asperger’s tests for women
I don’t know of an online test specifically for women with Asperger’s syndrome, but I believe the regular tests are indicative as long as we are able to find the real person underneath all the pretence. When I first took online tests, I tried to answer the questions as I would have done as a young woman, before I had learned to become the fake person.

“I’ve spent so long pretending, I’ve forgotten who I really am”
This is a sentiment I’ve heard from a lot of autistic women. Those who are successful in fitting in (even if they don’t ever feel truly accepted) find their real identities – the people they would be if they didn’t have to pretend to be someone else all the time – get blurred with the new “fake-normal” person they feel they have to be.

For my part, one way I tried to fit in was by going to coffee mornings, even once including a Macmillan coffee morning. I struggled terribly with the interaction, and was rarely invited back to the same house twice (still don’t know why), and would come away feeling terrible about myself; but because this is “what you do” as the mother of young children, I accepted each new invitation with relish, and looked forward to it as proof that I was a normal person. It was like a badge: I Go To Coffee Mornings – I Must Be Normal.

The day I got my diagnosis, I finally knew why the world didn’t accept me, and could see there were people who would never like me, however hard I tried, and strangely, I no longer cared. This realisation released me from ‘having to be someone else’. There was no point anyway – I could never be that normal person (I had a diagnosis to prove it), so I might as well go back to being ME again! I stopped wearing the fashionable, but uncomfortable clothes that stopped me climbing trees with my kids, and crawling under my car for dropped toys, and went back to jeans and t-shirts. I had all my hair cut off (what a blessed relief that was), and threw out my make-up and those stupid heel-rubbing shoes that I couldn’t even walk in, let alone hop, skip, and jump in. Eventually, I started to hop, skip, and jump, and wear multicoloured hats, and go barefoot if I wanted to – and sod the funny looks. And I could finally admit I hated coffee mornings, and never had to go to another one again.

You have a choice
Whether or not you have a diagnosis, I hope those of you who struggle to fit in will understand you have a choice about being friends with those women… the ones who need you to wear the ‘right’ clothes, and drive the ‘right’ car, and go to the ‘right’ people’s coffee mornings before they’ll accept you. I encourage you to see that people who need someone to fit in with their ideal of ‘the right person’ before they can be friends with you, clearly doesn’t deserve the friendship. 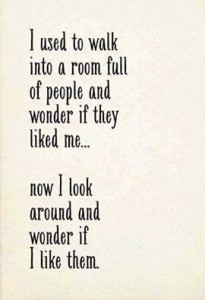 Related content:
» It’s Okay to Want a Diagnosis!”
» Think you might have Asperger’s syndrome?”
» Bullying & Abuse
» Symptoms of Asperger’s syndrome (from an aspie perspective)
» The Triad of Impairments (in real terms)
» Diagnosis Stories
» Online Tests

198 thoughts on “Asperger’s in Women”