I was thirty years old, and had done a lot of walking in the past, but standing at the start of the Coire an t-Sneachda path, facing the true wildness of the Cairngorm mountains for the first time, my confidence deserted me. This was big. This was serious. And like a frightened rabbit, I Couldn’t Do It.

In the ranger station, the log sheet recorded routes of those who had braved the tops that day. Oh, how I admired those magical folk who could make such a giant leap onto the summits, while I bottled a low-level walk into the coire. The ranger laughed, saying, “go, you’ll be fine,” and I found myself trusting him, even though he knew nothing about me or my experience. Unlike my own, I felt his judgement worthy of respect, and it was as though he’d given me permission to go. So I went. To my surprise, I survived. Heady with success, I wanted to do it again… and again. And again.

Twelve years on, I hike into much remoter areas than Coire an t-Sneachda. Places where mobile signals are like hen’s teeth, and I won’t see another soul for the duration. I must be totally self-reliant, knowing both what I can do, and what I can’t do: what gradients I can and cannot tackle; what river level is safe to cross and what is not; what weather conditions will compromise my route. These limits continue to grow as I push myself onwards, one small step at a time.

It seems odd now to think of that frightened rabbit on her first day in the big hills; these days, I’ll stroll into Sneachda just to take the air. I’ve done it so many times now, in all weathers, and I don’t need permission from the ranger any more. But that first walk was my first small step, on which many subsequent small steps have been built. Now, that frightened rabbit has become one of the magical folk, having turned experience to self-confidence, and many small steps into one giant leap. 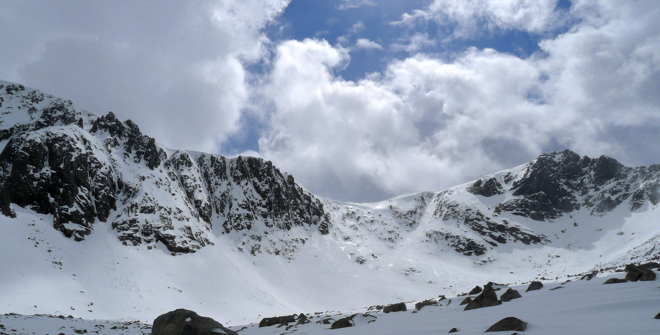 2 thoughts on “One Giant Leap”