The Naming of Cats
The naming of cats is a difficult matter.
It isn’t just one of those holiday games.
You may think at first I’m as mad as a hatter,
When I tell you a cat must have three different names.
–T. S. Eliot

When I was a kid, my mother bred siamese cats. The queens were given classical Greek names, like Electra, Athene and Antigone. When Athene was done over by the local tom cat, and seven little black kittens appeared soon after, it was decided I could keep one. You might think I’d wanted to call her Blacky, but no. Too abstract. This particular kitten had a habit of sleeping in a tray full of germinating delphinium seeds on top of the night storage heater in the kitchen, and I knew exactly what I wanted to call her. I can still remember my upset when my chosen name, Seed Tray, was rejected by my mother (who probably wanted Persephone or Hestia), and we eventually settled on Delphinium.

My naming of toys was similarly pragmatic, but as no one ever needed to call for them in the garden late at night, I was given a free rein. Forever remembering the rejection of Seed Tray, I have always felt my children should also have a free rein in this matter (leading to a small rodent with the grand title of Edward Guinea Guinea-Pig), and their toys have names like Big Baby, Big Bee (we also have Bee and Little Bee) Dog, Blue Dog, Rabbit and Pink Rabbit. You might think some imagination had come into play when my daughter introduces you to Lolly, until you realise she couldn’t say dolly when she was two.

By contrast, my father had a rabbit called Honeybunch, and my sister’s toys had names like Crazy (a bear she thought looked a bit mad) or Barney (a knitted bear with no connection to the name Barney). Her dolls had sensible girls’ names like Susan and Rebecca. I was so jealous of her thinking up the name Barney, that I called my version (who had blue knitted dungarees instead of green), Berney. That’s as abstract as I got.

So herewith a gallery of toys from my childhood: back row – Horsey, Crazy (my sister’s mad-looking bear), Berny, White Dog and Rabbit. Front row – Bluey, Pinky, Penguin and Mousey. What did you call your toys? 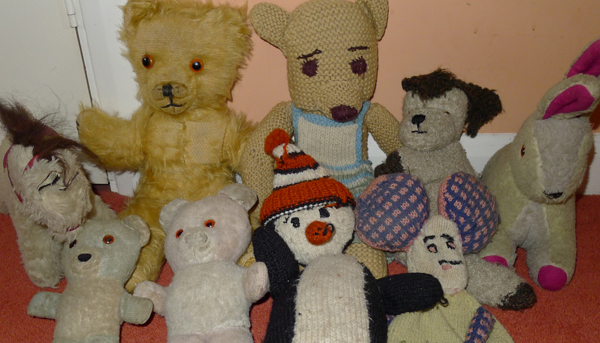 23 thoughts on “The Naming of Toys”